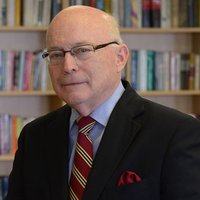 Dr. John W. Rowe is the Julius B. Richmond Professor of Health Policy and Aging at the Columbia University Mailman School of Public Health. Previously, from 2000 until late 2006, Dr. Rowe served as Chairman and CEO of Aetna, Inc., one of the nation's leading health care and related benefits organizations.

Before his tenure at Aetna, from 1998 to 2000, Dr. Rowe served as President and Chief Executive Officer of Mount Sinai NYU Health, one of the nation's largest academic health care organizations. From 1988 to 1998, prior to the Mount Sinai-NYU Health merger, Dr. Rowe was President of the Mount Sinai Hospital and the Mount Sinai School of Medicine in New York City. Before joining Mount Sinai, Dr. Rowe was a Professor of Medicine and the founding Director of the Division on Aging at the Harvard Medical School, as well as Chief of Gerontology at Boston's Beth Israel Hospital. He was Director of the MacArthur Foundation Research Network on Successful Aging and is co-author, with Robert Kahn, Ph.D., of Successful Aging (Pantheon, 1998).

Currently, Dr. Rowe leads the MacArthur Foundation's Network on An Aging Society. Dr. Rowe was elected a Fellow of the American Academy of Arts and Sciences and a member of the Institute of Medicine of the National Academy of Sciences. He serves on the Board of Trustees of the Rockefeller Foundation and is Chairman of the Board of Overseers of Columbia University's Mailman School of Public Health and the Board of Fellows of Harvard Medical School. He was founding Chair of the Advisory Council of Stanford University's Center on Longevity, a founding Commissioner of the Medicare Payment Advisory Commission (Medpac) and Chair of the Board of Trustees of the University of Connecticut and the Marine Biological Laboratory.